Have you recently started working out, and feel like your body needs an extra boost to really get going? Or maybe you've been working out for a while, and feel like you've hit a plateau that only the best bodybuilding supplement can help your break through? No matter which group you belong to, you might be in the market for a product like Elite Test 360. And their online advertising might lead you to believe that it's the workout supplement you've been looking for. But this review is designed to question their claims, and discover the truth about Elite Test 360.

Elite Test 360 is a fairly simple supplement, and only contains the following two ingredients: 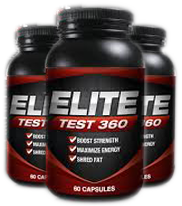 On the manufacturer's homepage, they strongly imply that you should really be taking Elite Test 360 with another product they sell, Ripped Muscle X. They don't exactly go into detail, but it seems as though Ripped Muscle X is no more than a simple creatine supplement.

How Much Does Elite Test 360 Cost?

If you go for the "free trial" claims on the manufacturer's website, then you will have 14 days between the day you place your order and the day you decide that you aren't satisfied to cancel your trial and opt out of future shipments. If you fail to cancel your trial in time, you'll be auto-billed $89.99 every month for however long it takes you to cancel. You can also get it on Amazon for $49.49, without the hassle of auto-billing, recurring shipments, or trying to cancel your subscription.

As much as we'd love to take some time to go over our many reasons why Elite Test 360 is the clear winner of our "Douchiest Stock Photo" contest, there's something even more "WTF" about this product than that. And it comes from the one-star customer review voted "Most Helpful" on amazon.

The review was written by a young fireman in his late 20's who, before starting Elite Test 360, was perfectly healthy (and he had the medical records to prove it). After taking Elite Test 360 for 3 whole months, he experienced:

After those three months, his symptoms were so severe that he had to go back to his doctor to find out what was wrong. After some medical tests, his doctor informed him that his testosterone levels actually decreased since his last appointment. Yes, you read that right. Decreased, as in "went down" ... which is the exact opposite of what a male enhancement product is supposed to do.

Will Elite Test 360 Give my Sex Life the Boost It Needs?

In our honest opinion, it doesn't seem as though Elite Test 360 is the best bodybuilding or even the best male enhancement supplement available. The fact that they expect anyone to pay between $50-$90 dollars for 400 mg of L-Arginine is a little absurd if you ask us. And tribulus fruit extract is so popular for male enhancement these days that we're pretty sure you can find it for a lot less money somewhere else.

If you were hoping for better news about Elite Test 360, don't despair. There are many high-quality male enhancement supplements on the market right now Take a look at our Top Picks here!